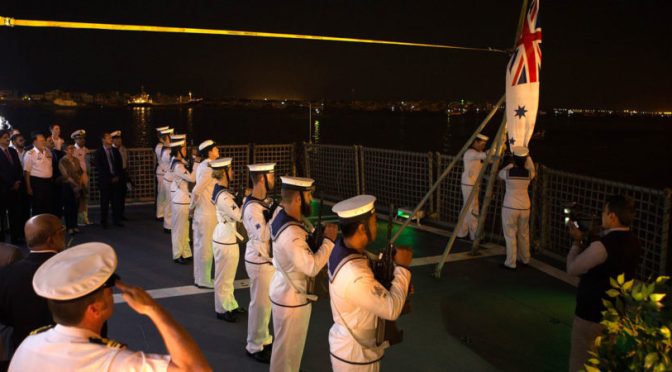 HMAS Arunta is visiting the Port of Karachi to participate in Exercise AMAN during her deployment to support Australia’s efforts to promote maritime security, stability and prosperity in the Middle East region.

High Commissioner Adamson reflected on the depth and breadth of the 70-year relationship between Australia and Pakistan, noting in particular the longstanding exchange of military officers through both countries defence training academies. Australia works closely with Pakistan in maintaining maritime security and stability in the Indian Ocean with our Navy ships working closely together in the Combined Maritime Forces.  We are also members of the Indian Ocean Naval Symposium (IONS), which aims to strengthen member states’ collaborative capacity, notably through the Humanitarian Assistance and Disaster Relief, Counter-Piracy and Information Sharing Working Groups,” Ms Adamson said.

HMAS Arunta and her ship’s company of 191 departed HMAS Stirling naval base at Rockingham, Western Australia for Operation MANITOU in the Middle East Region in November last year. During her nine-month deployment, HMAS Arunta is conducting maritime security operations including counter terrorism, counter piracy and narcotics interdiction as part of the multi-national Combined Maritime Forces in the Persian Gulf, the Gulf of Aden, the Red Sea and parts of the Indian Ocean. 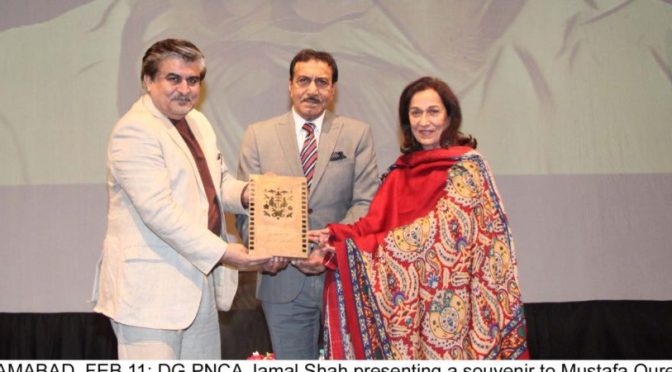 ISLAMABAD: At a Tribute to Mustafa Qureshi organized by Pakistan National Council of the Arts at the PNCA Auditorium artists and filmmaker praised the great work done by the legendary artist. The star studded evening of veteran actors and actresses applauded Mustafa Qureshi life long career of artistic craftsmanship and versatility. The evening also featured highlights consisting clips from different films and live performance by artists on his popular films and characters.

Mehtab Akbar Rashidi, veteran Radio Pakistan artist and current member of Sindh assembly recounted her memories regarding Mustafa Qureshi and his early career at Radio Pakistan, Hyderabad from where he started his artistic career. Artistes’ services were usually acknowledged after their death but it was a good tradition that they were receiving appreciation in their lives, she said. There is a need to preserve and archive the golden history and art of Pakistani cinema, she added.

Samina Ahmad, senior TV artist appreciated the versatility of Mustafa Quershi and his personal interest in researching and learning his characters during his long career as film star. She also shed light on the efforts of Mustafa Qureshi for the welfare of artists. Bahar Begum, the veteran film star and heroin of Mustafa Qureshi in many films recollected her memories from their early career in Pakistan film industry and informed the audience that how easily he adapted and learned Punjabi although he was from Sindh.

Director-General, PNCA Jamal Shah said he was delighted to be among the artistes whom he liked and have been inspiration for his artistic career. He reiterated his resolve to support and promote Pakistani Arts and Cinema. He announced that National Film Academy will be established in Islamabad and this year International Islamabad Film Festival will be organized this year. He also stressed the need to expand the artist benevolent fund for the welfare of the artistic community. Mustafa Qureshi expressed his gratitude to the gathering for showering so much love and honor on him He said such gatherings helped encourage artistes and the tradition must continue. Mustafa Qureshi was presented a shield from PNCA for his contribution to the Pakistani cinema at the end of the evening.

Former United States President George W. Bush mistakenly described the invasion of Iraq as “brutal” and “unjustified” before correcting himself to say he meant to refer to Russia’s invasion of Ukraine. Bush made the comments in a speech during an event in Dallas on Wednesday, while he was criticising Russia’s political system. “The result is … END_OF_DOCUMENT_TOKEN_TO_BE_REPLACED

Reuters: More than 500,000 people have fled their homes in India’s northeastern state of Assam to escape heavy floods triggered by pre-monsoon rains that drowned seven, authorities said on Wednesday, as they warned the situation could worsen. One of the world’s largest rivers, the Brahmaputra, which flows into India and neighbouring Bangladesh from Tibet, burst … END_OF_DOCUMENT_TOKEN_TO_BE_REPLACED

The government began talks with the International Monetary Fund (IMF) on Wednesday over the release of crucial funds, a process slowed by concerns about the pace of economic reforms in the country. Pakistan has repeatedly sought international support for its economy, which has been hit by crippling national debt, galloping inflation and a plummeting rupee. … END_OF_DOCUMENT_TOKEN_TO_BE_REPLACED