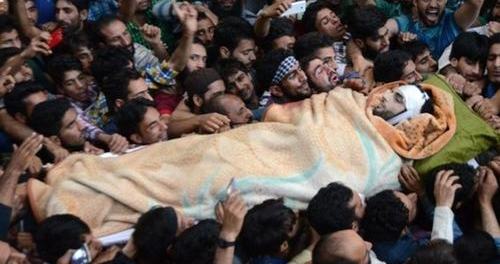 The news first broke when I was in the north of Kashmir in Vijbal, a town of less than a hundred households.

My cousins had invited me for dinner as I was scheduled to leave for New Delhi right after Eid.

One of my friends from Tral, south of Kashmir, informed me through a Whatsapp text: Burhan Wani has been killed.

I didn’t believe him. It was just a rumour, I thought. Half an hour later, the Indian media erupted in celebration, announcing victory.

Abhijit Majumdar, the managing editor of Mail Today, chipped in: “with Burhan Wani’s killing, Indian forces have eliminated entire gang of Facebook terror poster-boys of #Kashmir one after the other. Salute.”

Cars, trucks, and motorcycles began to honk mindlessly. My aunt worriedly asked her son to check if everything was alright.

Burhan gove shaheed (Burhan has been martyred), I told them.

They looked back at me in shock.

My aunt began to wail.

Ye kusu tawan cxunuth khudayoo (what tragedy did you send upon us, oh God), she lamented.

The heavens opened up at the same time and the sound of rain hitting the tin-roof of the house got louder.

I looked at my cousin, red-faced, eyes welling up, his body shivering.

His phone rang and he finally noticed on the fifth ring. It was my mother calling.

By the next morning, the internet was blocked. People were expecting mobile networks to be shut by the government as well in order to restrict communication in the valley.

People know how the state functions. The Indian state’s oppression is as routinised in war-time as it is in peace-time.

People knew that in the coming days, the only way to communicate and find out what was going on would be to travel, on foot, from village to village. They knew that they had to avoid the highways which are constructed to allow smooth movement to Indian military convoys only.

Rafiabad, the place where I live, is as militarised as any other place in Kashmir. Indian army camps are located every five kilometres from one another, allowing them to bring every village and its people under the army’s view.

The army knows the number of people in each household, including how many males and females, educated and uneducated, where they work, newborns, adults and old.

They have numbered our houses and categorised the localities. They have marked our streets, shops, playgrounds, even the apple orchards.

They know the size of our courtyards and backyards, as well as the the shape of our cowsheds.

As the protests and stone-pelting began, so did the congregational funeral prayers.

People began to count the dead. And the numbers kept rising.

The campaign of killing, blinding, maiming and torturing people continued.

The protests were a sign of the Indian state losing all ground. The divisions that they had constructed — Shia-Sunni, Muslim-non-Muslim, Kashmiri-Ladakhi, Tableeghi-Salafi, majority-minority — to obfuscate the truth went up in smoke as the air was now incensed with songs of freedom.

But in the newsrooms in India, it was the perennial threat that was being accused of fomenting the trouble. Pakistan, they said, was responsible for causing unrest in Kashmir.

Sometimes, one imagines, if Pakistan were to tectonically shift from here to Antarctica, where would the Indian state and its jingoistic media derive their narrative from?

Who will they blame for their own failure and guilt, their own deception and debauchery?

Soon after (dates have lost their significance) the death of Burhan Wani, people of Rafiabad assembled near the Eidgah in Achabal.

The announcement was made through the mosques’ loudspeakers. People from adjacent villages poured in as well. As the numbers kept rising, so did the volume of the slogans, causing panic inside the Indian army camp nearby.

As the protesters neared the army camp, two armoured vehicles blocked the way on one side.

Rest of the road was sealed with barbed wires. The demonstration came to a halt, but the sloganeering did not.

Soon, there was chaos.

As stones were hurled at the armoured vehicles, more army men from the camp arrived and started moving toward the protesters with guns and lathis. A few protesters started to turn back.

A direct confrontation with the Indian army, we are told by our elders, should be avoided. But some among the protesters didn’t relent and stood their ground firm.

Several of them were later picked up. All security installations in Kashmir are equipped with high-quality surveillance cameras to keep watch on the people’s every movement.

From the footage, they identified the persons who were at the forefront of the march. They knew who these men were. They knew their addresses. They could pick them up from inside their bedrooms.

Inside the camp, they were tortured. One of the boys later told me about how they were made to stand naked, abused, spat on, and beaten with guns, sticks and belts till their bodies bled. They were given death threats and some were even made to jump naked in the river. Yet, after he came out of the prison, he was determined to protest again.

Another boy, in his pre-teens, lying flat in his room, smiled as I entered to see him. He didn’t appear to have been affected by the torture at all.

He was waiting for a bandage to be removed from his back. “I remember the face of the army man who beat me up”, he said, “I won’t spare him”.

He was clearly enraged. He wanted to avenge what was done to him.

It is this anger and this sense of revenge, especially among the youth, which the ‘experts’ on Kashmir amplify and manipulate to present the issue as a problem of inteqaam (revenge) alone.

They also see in the youth a rage informed by religious extremism.

For years now, these Kashmir ‘experts’ have dedicated all their energy and resources to maintain control over the Kashmir narrative that comes on TV screens and newspapers.

In April this year, when an Indian army trooper was accused of molesting a teenage female student in Kupwara, a group of reporters were dispatched from New Delhi to report the aftermath in which five protesters were killed, including a woman.

The Kashmiri reporters working for various Indian media organisations, barring a few exceptions, were asked to stand down or take leave of absence or just assist the reporters airdropped from New Delhi.

While the reporters filed contradictory versions of the actual incident, India’s Kashmir ‘experts’ were quick to process the information and construct a narrative which helped the government to systematically shift the focus from the molestation to the protests.

Praveen Swami, one of India’s leading Kashmir ‘experts’, a journalist who has the audacity to tell Kashmiris that he knows more about Kashmir than Kashmiris themselves, tried to historicise the violent protests. For him, “the underlying crisis in Kashmir needs to be read against the slow growth, from the 1920s, of neo-fundamentalist proselytising movements.”

He implied that allegations of sexual violence against an Indian army man do not merit any protests as per secular traditions and only religious movements, like the Jamiat Ahl-i-Hadith and Jamaat-i-Islami, can inspire people to take such a recourse.

Two more ‘experts,’ David Devadas and Aarti Tickoo Singh, whose writings have a clear streak of right-wing bigotry, indulged in victim blaming and in theologising the movement for self-determination in Kashmir.

Devadas wrote that the different “narratives emphasise that unarmed ‘civilians’ were killed by armed forces, with no reference to the fact that the mobs attacked an army bunker and a camp before the army retaliated”. Four months later, Devadas said that “it still isn’t clear what exactly lies at the heart of the current unrest.”

Aarti Tickoo Singh believes that in 2010 “stone pelting phenomenon that led to the death of over 100 youth during clashes with the forces was restricted to urban poor Sunni Muslim youth in Srinagar”. She also cites a study by Indian police officials that “lack of entertainment resources and Saudi-funded religious radicalisation” motivate the youth towards violence.

These ‘experts’ have time and again warned the people of Kashmir about the capabilities of the Indian State: you will be killed if you come out on the streets.

For them, the responsibility of Kashmiris getting killed by an Indian soldier is on the Kashmiris and not on the Indian state.

However, their ideological manipulations have been of little consequence to the people of Kashmir.

Men, women, young and old, come out daily in the streets of Kashmir with the slogan: Hum kya chahtey? Azaadi!

Freedom, self-determination and the right to live in peace are innate to a people. No matter how much violence the Indian state resorts to and no matter how much the country’s media manipulates the narrative surrounding what’s going on in Kashmir, the people of Kashmir will keep coming out on the streets to demand for their rights.

The views expressed by this writer and commenters below do not necessarily reflect the views and policies of the NNP Group.