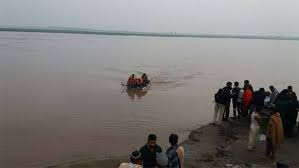 LAHORE: A boat with at least 25 people aboard capsized in Punjab’s Ravi River near Nankana Sahib. Rescue work is underway to recover those drowned. According to our correspondent, the incident occurred at Syed Wala area near Nankana Sahib where an overloaded boat carrying more than 25 people sunk. Locals, police and rescue teams reached the scene to rescue the boat passenger. Reports said at least 25 people drowned, with several rescued and many still missing. There was no confirmed figure available about casualties as rescue was underway in an area where people often use boats to travel from one shore to another.