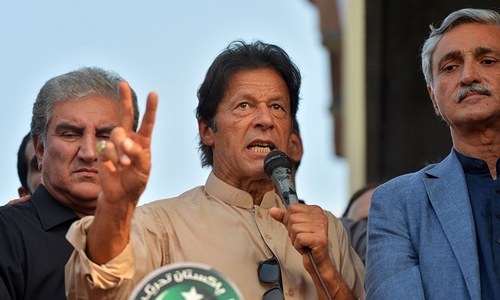 Mr Dar had given a handwritten statement to a magistrate on April 25, 2000, alleging that the Sharif brothers had used the Hudaibya Paper Mills as a cover for money laundering in the late 1990s.

After becoming an approver, Mr Dar had confessed that he had laundered Nawaz Sharif’s money, said Mr Khan, adding that this was the actual money trail of the PM’s London flats.

PML-N argues that the affidavit was given under duress

He said Mr Dar had given the statement while being investigated by the National Accountability Bureau (NAB), and when he filed an appeal against the NAB court decision in a high court, the bureau did not challenge it. “That is because the NAB chairperson was appointed by Nawaz Sharif.”

He said the Supreme Court had also directed NAB to provide documentary evidence as to why it had not gone into an appeal against the high court’s decision.

The prime minister has even made his own father, Mian Sharif, a ‘money launderer’ by placing the onus of their offshore investments on him, the PTI chief said.

The Sharif family’s Gulf Steel Mill had been running a huge loss, approximately 15 million dirhams in Dubai, how could it have been sold off for 12m dirhams, Mr Khan questioned.

On the other hand, PML-N’s Daniyal Aziz and Prime Minister’s Adviser Mussadiq Malik held a press conference at the Press Information Department where they claimed that Mr Dar’s statement had been obtained under duress.

“When a person is taken to the basement of Attock Fort, he says whatever he is asked to say,” said Mr Malik.

The adviser said Mr Dar’s case had been tried thrice in the past and the decisions had been in his favour. “Double jeopardy law does not allow the trial of a person more than once on a specific issue.”

The government launched a crackdown against JuD and a heavy contingent of police was deployed around the JuD headquarter and offices in Muridke and Lahore.

“A large police team arrived (at JuD headquarters) and told us that Hafiz would be placed under house arrest,” said the secretary of information for JuD, Nadeem Awan.

Awan said the police told them they had an arrest warrant for Saeed and five others at JuD headquarters.

Hafiz Saeed was reportedly present at the Qudsia Mosque located in Chauburji area of Lahore. Contingents of police and other law-enforcing agencies reached the area and surrounded the premises, sources said.

Police sources further informed that Saeed will be shifted to his residence in the Johar Town area of the provincial capital, which will then be declared as a sub-jail.

Saeed has been detained under Section 11-EEE(1) of the Anti-Terrorism Act, 1977, a notification issued by the interior ministry said.

Meanwhile, the district intelligence committee has suggested it to the government to put the JuD chief’s name in fourth schedule.

Moreover, national flags have been hoisted at the JuD offices in Lahore, instead of party flags, on the directives of provincial home department, it added.

The provincial authorities have also started to remove the banners of JuD from the roads of Lahore.

The move comes after years of pressure on Pakistan to put Saeed on trial and could ease recently escalating tensions with neighbour and arch-foe India.

Saeed had been accused by the United States and India of masterminding the 2008 attacks on the Indian financial capital Mumbai that killed 166 people.

He, however, has repeatedly denied involvement in the 2008 Mumbai attacks.

Awan said the Pakistani government had been under pressure from the United States to take action against Saeed or face sanctions. “This government has buckled under the pressure.”

In 2012, the United States announced a bounty of $10 million on Hafiz Saeed for his alleged role in the attack in which six American citizens were also killed.

RAWALPINDI: With another spell of snowfall predicted in Murree, a comprehensive plan has been chalked out by traffic police for the convenience of those whose access to the hill station had been restricted, following the tragic death of 22 tourists in a blizzard last week. Drivers with valid licenses will be allowed to travel to … END_OF_DOCUMENT_TOKEN_TO_BE_REPLACED

NEW DELHI: Indian media bodies have deplored the forcible takeover of the Kashmir Press Club in Srinagar by a group of journalists who raided the precincts on Saturday under the watch of armed police — a month before fresh elections are due to be held there on Feb 15. The takeover, described by media spokespersons … END_OF_DOCUMENT_TOKEN_TO_BE_REPLACED

PARIS, Jan 13 (Reuters) – Tens of thousands of French teachers angry with the government’s COVID-19 rules walked off the job on Thursday and took to the streets to demand better protection for pupils and staff against infection. “Stop your contempt,” and “We’re fed up with tests” teachers proclaimed on banners in rallies across France, … END_OF_DOCUMENT_TOKEN_TO_BE_REPLACED