According to official sources, one of the corpses was found in the Kathreenz area near Mand of Kech district.

Personnel of the local administration and Levies force inspected the place and oversaw the transfer of the body to a government hospital.

The man was identified as Azad, son of Chakar.

“The victim was kidnapped last week by some armed men,” a senior Levies officer said, adding that bullets were pumped into his head and chest.

The other body was found in the Keelkaor area of Panjgur.

Levies personnel shifted it to the district hospital. He was identified as Behram, son of Khuda Bakhsh. “Behram was abducted by armed men a week ago from Panjgur,” Levies officials said, adding that multiple bullet wounds were found on the body.

The cause of the killing could not be known. No one claimed responsibility for their kidnapping and killing.

The Levies began an investigation into the incidents.

RAWALPINDI: Elem­e­n­ts linked with the militant Islamic State (IS) group who are returning to Pakis­tan from Syria could pose a serious threat to the security situation in Punjab, intelligence sources have warned.

The IS-linked militants, who ostensibly went from Pakistan to fight in Syria, are likely to return via Afghanistan. In the past, there have been reports of a number of Pakistanis joining the ranks of the IS to fight in the ongoing battle between the Syrian government and militants.

Amir Rana of the Pakistan Institute of Peace Studies said it was not certain weather the militants attempting to return were Pakistanis or expatriates.

In a recent meeting, sou­rces said, law enforcement officials were asked to ado­pt a proactive appr­oach to control militancy and anti-social elements. Rawal­pi­n­di police chief Israr Ahmed Abbasi told Dawn: “Joint search and combing operations are being conducted in the district on a regular basis to keep a check on suspicious elements.”

Properties owned by the Sharif family in London’s upscale Park Lane neighbourhood were purchased in the 1990s and there has been no change of ownership since then, BBC Urdu reported on Friday.

According to official documents available with BBC Urdu, the four flats were purchased in the name of the Nielsen and Nescoll companies.

According to the documents, an official record of companies doing business in the United Kingdom reveals that when Hassan Nawaz established Flagship Investment Ltd in 2001, the address he provided at the time of registration of the company was that of his Park Lane apartment.

After the Panama Papers were published, Prime Minister Nawaz Sharif’s son, Hussain Nawaz, had accepted the family’s ownership of Nielsen and Nescoll.

Hussain had said: “The Park Lane apartments in London are ours, two offshore companies, Nielsen and Nescoll, own these flats and I am the beneficial owner of these companies, working under a trust held by my sister Maryam Nawaz Sharif.”

Pakistan Tehreek-i-Insaf’s (PTI) lead counsel Naeem Bokhari, during the ongoing Supreme Court hearing of the Panamagate case, has alleged that the owner of the London flats is Prime Minister Nawaz Sharif.

Bokhari has claimed that the flats had been bought between 1993-1996 under the name of the premier’s daughter, Maryam Nawaz, who he said was underage at the time and was only made a beneficiary ‘for show’.

The PTI has been trying to establish that Maryam Nawaz, and not her brother Hussain Nawaz, as claimed by the PML-N earlier, was the beneficial owner of Minerva Financial Services Limited, which held Nescoll Limited and Nielson Enterprises Limited — the owners of the London flats.

Supreme Court Justice Asif Saeed Khosa, who is heading the five-member bench hearing the case, has cautioned the Sharif lawyers that if they were unable to establish ownership of Minerva Financial Services Limited, the court would have to ‘imagine’ that what PTI lawyers claim is true.

Year’s first rain hit the metropolis, with varying strengths of sporadic showers across the city.

A 35-year-old man was electrocuted while five others were injured when an electric wire fell near the Karachi Korangi Crossing area, according to police in Ibrahim Hyderi.

A police official said that Abid Sarwar and his wife had gone shopping to the Korangi Juma bazaar when an electric wire fell on him. Sarwar died on the spot while five others fell unconscious, the officer added.

The body was shifted to Jinnah Post Graduate Medical Centre.

In a separate incident, 25-year-old Mohammed Asad was killed after receiving severe head injuries when he fell off his motorcycle at Kashmir Road in the metropolis, Edhi Foundation’s spokesperson confirmed.

Asad was a resident of Surjani Town.

He also ordered them to be extra vigilant with regard to street crimes, saying it is a “critical” time for such activities.

Meanwhile, DIG Traffic Asif Aijaz Shaikh said that a car caught fire near a bus stop in Shah Faisal town, impeding traffic moving towards the airport. He also cautioned the citizens to drive carefully during rain.

Furthermore, due to the Karachi Eat Festival at Frere Hall, the traffic is moving slowly.

A K-Electric spokesperson said that some areas of Karachi experienced a “partial” power outage where the “affected” feeders were “re-energised” immediately.

The Pakistan Meteorological Department has forecast cloudy weather with light rain and gusty winds for the metropolis during the next 24 hours.

According to the Met office, the minimum temperature is expected to range between 12 to 14 degrees Celsius with humidity drawing to at least 70 per cent. 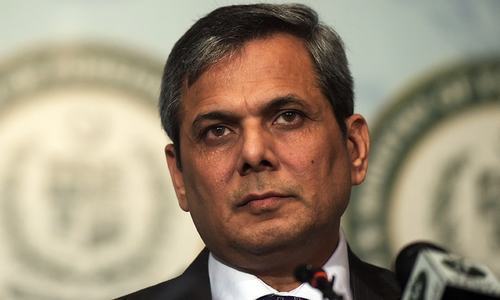 The Foreign Office (FO) on Friday reiterated that Pakistan does not allow its territory to be used for attacks in any other country, Radio Pakistan reported.

The FO Spokesman Nafees Zakaria strongly rejected claims regarding allegations of terrorist safe havens in the Federally Administered Tribal Areas while responding to media queries, adding that Pakistan has lost thousands of its citizens and suffered economic losses of over $100 billion due to terrorism.

The United States (US) endorsed Kabul’s claim that the existence of safe havens in Fata allowed terrorists to carry out attacks inside Afghanistan whenever they want following twin suicide blasts near the Afghan parliament earlier this week.

The blasts killed scores of people. A separate blast in Kandahar wounded the UAE Ambassador Juma Mohammed Abdullah Al Kaabi and some other diplomats.

Soon after the blasts, a government spokesman in Kabul said the terrorists were able to strike targets inside Afghanistan whenever they wanted because Pakistan had allowed them to maintain safe havens in Fata, a charge Islamabad rejects as baseless.

US State Department Spokesman Mark Toner had said that Pakistan had made “some progress” and had taken “some steps to address these safe havens, but clearly the problem persists”.

That’s why the United States continues to urge Pakistan to act against all terrorist groups without any discrimination and was “willing to help them” do so, Toner said, acknowledging that the remoteness of the area and the military’s tactical limitations prevent Islamabad from eliminating all terrorist safe havens.

Zakaria said Pakistan’s contribution in the fight against terrorism and sacrifices have been acknowledged at an international level, and that Pakistan remains committed to peace efforts in Afghanistan.

The Indian Charge d’Affaires (Cd’A) in Islamabad was called to the Ministry of Foreign Affairs today and conveyed Government of Pakistan’s unequivocal rejection of India’s illegal and unilateral actions of 5 August 2019 in Indian Illegally Occupied Jammu & Kashmir (IIOJK), which breached international law, UN Charter and the 4th Geneva Convention as well as … END_OF_DOCUMENT_TOKEN_TO_BE_REPLACED

Al Qaeda leader Ayman al-Zawahiri was killed in a US strike in Afghanistan over the weekend, American President Joe Biden said on Monday. Zawahiri, an Egyptian surgeon who had a $25 million bounty on his head, helped coordinate the Sept 11, 2001, attacks that killed nearly 3,000 people. US officials, speaking on the condition of … END_OF_DOCUMENT_TOKEN_TO_BE_REPLACED

WASHINGTON: Former US president Donald Trump returned to the US capital this week and delivered a speech that’s being interpreted as his first for the 2024 election campaign. “As Trump speaks in Washington, his allies prepare for a second term,” The Washington Post reported. “Trump supporters are already working on a government-in-waiting if he wins re-election in … END_OF_DOCUMENT_TOKEN_TO_BE_REPLACED