The opening session of the four-day conference was attended by Advisor to Prime Minister on National History and Literary Heritage Irfan Siddiqui, Intellectual from Turkey Dr Jalil Tauqar and writers and poets from Iran, Spain, Afghanistan, Azerbaijan, Singapore, Oman, Maldives, Lebanon, China and Germany. Speaking high of writers and intellectuals and their role for establishment of peace and harmony in any society, he said they were the most precious asset of any society as, though their works, they eliminated hatred, differences and bring the people closer to one and another. He said through operation Zarb-e-Azb, the government and security forces had broken the backbone of terrorists and reiterated his government’s resolve to revive peace and love in the country. The prime minister announced an endowment fund of Rs 500 million for the promotion of national history and literary heritage besides the welfare of writers and intellectuals.

He also sought a proposal for an aid package to support the artists, serving in the fields of music, drama, films and calligraphy who unfortunately lead a miserable life at a certain stage after having entertained millions of the people throughout their lives. Beside announcing the establishment of Intizar Hussain Award worth Rs 1 million, the prime minister increased the number of beneficiaries of insurance cover from current 354 intellectuals to 700, annual awards from current 11 to 20 and number of writers, entitled for support from 500 to 1000. The prime minister said the writers and intellectuals were the heart, brain or spirit of any society as they not only addressed the current situation also keep an eye on the future scenario. He said writers and intellectuals also give a ray of hope to the desperate people. The Muslims had lost their grandeur after they distanced them from research and education. He said Allama Muhammad Iqbal gave a message of freedom and struggle to the Muslims of South Asia and the whole world and dreamt of an independent Muslim state some 17 years before the creation of Pakistan.

The prime minister hoped that four-day event would also discuss as how the writers and intellectuals could play their role to eliminate intolerance, sectarianism and prejudices. He observed that “unfortunately we were losing mannerism with tones getting harsh. The very behaviors ultimately beget the ills of extremism and intolerance.” Prime Minister Nawaz Sharif said amid such situation, people needed to be given a message of hope as some other elements were dragging the society into desperation. 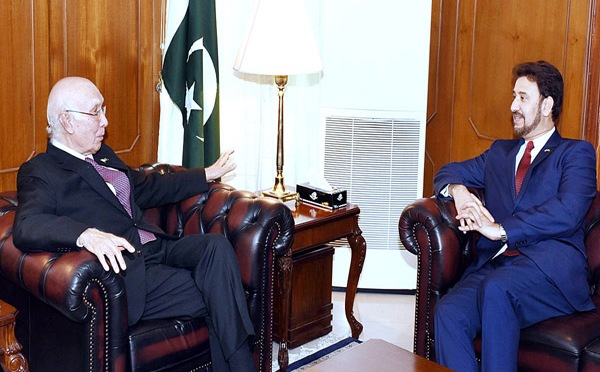 ISLAMABAD: Member of the European Parliament (MEP), Afzal Khan called on Sartaj Aziz, Adviser to the Prime Minister on Foreign Affairs in the Ministry of Foreign Affairs here Thursday. According to a foreign office statement, the Adviser underscored the importance Pakistan attaches to its relations with the European Union (EU) and noted that Pakistan-EU partnership was moving in the right direction. In this regard, Sartaj Aziz appreciated Afzal Khan’s continuous support at the European Parliament, especially on the Jammu and Kashmir issue.

The Adviser also underlined the need for more frequent parliamentary exchanges between the two sides to strengthen the existing relationship. During the meeting, the Adviser briefed the MEP about the government’s policies aimed at enhancing welfare and security of the people, generating economic growth and addressing the energy crisis.

He also apprised the MEP of the measures adopted by the government for promotion of human rights in the country. The MEP acknowledged the sacrifices made by the people and government of Pakistan in their fight against terrorism.

He also appreciated the steps taken by the government for protection and promotion of human rights. Acknowledging the positive impact of government’s socio-economic policies, he assured his continued support for Pakistan in the European Parliament. 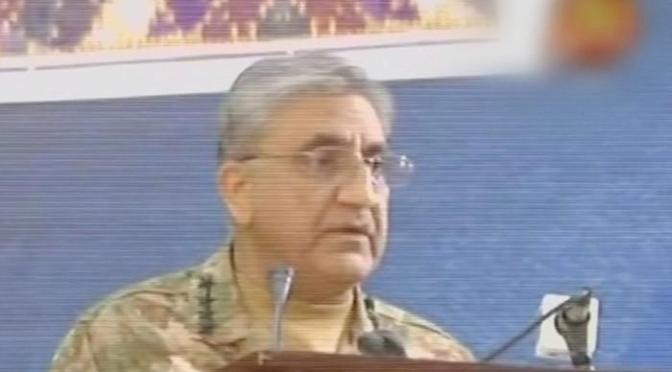 KHUZDAR: Chief of Army Staff (COAS) General Qamar Bajwa promised development in every corner of Balochistan and vowed to restore peace in the province at any cost; he was addressing a ceremony at the Khuzdar University. The Army Chief said announced that an engineering university would be established in the province, adding that 30,000 brave Baloch sons were serving in the Pakistan Armed Forces including the Navy and Air Force. Chief of Army Staff (COAS) General Qamar Bajwa highlighted that 25,000 children are receiving quality education at the FC and Army Public Schools in the province.

The Army Chief expressed confidence that the current security challenges and external efforts to derail Balochistan’s peace will end with the growing realisation of assured geo-economic advantages of a fully developed China-Pakistan Economic Corridor (CPEC) and infrastructure projects all over Balochistan. He said Balochistan today, is under sharp focus due to its geographic importance in relation to the role that it is likely to play in the regional economy. He said our enemies have been trying since long to keep Balochistan in a state of unrest and instability. Gen Bajwa said we being a resilient nation have fought well and have defeated their design.

He said that development of Gwadar Port, construction of 870 km of road infrastructure and realisation of CPEC is a testimony of our national resolve. Federal and provincial governments, as well as the army, are trying their best to ensure peace and stability in the province. General Qamar Bajwa said, “What we need to do is to remain focused on our vision of connecting the whole region and even beyond, for economic growth and prosperity”. He said that the network of development projects envisioned under CPEC will put Balochistan at the heart of our national development effort. “If we manage to stay committed to this vision, we will be connected, not only with China, Central Asia and Africa but also with other important economies of the world. Thus, these developments will transform Balochistan into a vibrant model of development for the entire region and beyond”, he added.

He said that the efforts have added to our security demands in the short term, its success will comprehensively enhance our national security in the long-term. “As far as the security of ongoing developmental activity and future trade running through the province are concerned, we should adopt a people-centric approach, based on local ownership”, Army Chief said. He said that over the past few years, Pakistan Army and other LEAs, with full support of people of Balochistan have contributed immensely to shape the environment for undertaking this vital national project. “Today, Alhamdulillah positive results are in front of everyone”, he added. He further said that Pakistan Army will leave no stone unturned to ensure our due role. But at the end of the day, the great people of the province, especially the youth will have to take charge of their own destiny.

RAWALPINDI: With another spell of snowfall predicted in Murree, a comprehensive plan has been chalked out by traffic police for the convenience of those whose access to the hill station had been restricted, following the tragic death of 22 tourists in a blizzard last week. Drivers with valid licenses will be allowed to travel to … END_OF_DOCUMENT_TOKEN_TO_BE_REPLACED

NEW DELHI: Indian media bodies have deplored the forcible takeover of the Kashmir Press Club in Srinagar by a group of journalists who raided the precincts on Saturday under the watch of armed police — a month before fresh elections are due to be held there on Feb 15. The takeover, described by media spokespersons … END_OF_DOCUMENT_TOKEN_TO_BE_REPLACED

PARIS, Jan 13 (Reuters) – Tens of thousands of French teachers angry with the government’s COVID-19 rules walked off the job on Thursday and took to the streets to demand better protection for pupils and staff against infection. “Stop your contempt,” and “We’re fed up with tests” teachers proclaimed on banners in rallies across France, … END_OF_DOCUMENT_TOKEN_TO_BE_REPLACED