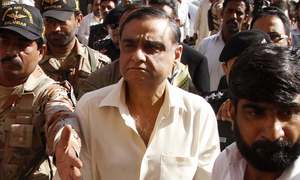 The Sindh High Court (SHC) on Tuesday approved the bail application of Dr Asim Hussain in a case relating to the alleged treatment of terrorists at his hospital.

Dr Asim was booked on the complaint of Rangers for allegedly treating and harbouring suspected terrorists, militants and gangsters at the North Nazimabad and Clifton branches of his hospital at the behest of some MQM and PPP leaders.

Dr Hussain, the chairman of the Sindh Higher Education Commis­sion, had been picked up by the paramilitary force of Rangers on Aug 26 last year.

A report issued by the doctors at Rawalpindi Central Jail Adiala declared Zahir Jaffer, primary accused in the Noor Mukadam murder case, medically “completely fit” on Thursday. Additional Sessions Judge Atta Rabbani received the report at today’s hearing, where Zahir was brought by policemen on a stretcher. The report stated that Zahir’s medical examination was … END_OF_DOCUMENT_TOKEN_TO_BE_REPLACED

BEIJING: Chinese For­eign Ministry Spokesperson Zhao Lijian brushed away media reports that suggest the Chinese contractor has demobilized from the Dasu dam project site. At his regular briefing at International Press Centre (IPC) on Thursday, Mr. Zhao said he was unaware of any preconditions put forward by the contractor for resuming work on the dam … END_OF_DOCUMENT_TOKEN_TO_BE_REPLACED

India and Pakistan will lock horns in a blockbuster T20 World Cup group clash for the second year running after the fixtures for the October-November 2022 tournament in Australia were announced on Friday. The arch-rivals will lock horns at the Melbourne Cricket Ground (MCG) on October 23, a day after Australia begins their title defense … END_OF_DOCUMENT_TOKEN_TO_BE_REPLACED