LAHORE: Punjab police cracked down on PTI workers across Punjab, as the ‘Islamabad Lockdown’ protest of the opposition party approaches nearer.

Sources disclosed that senior police officials decided to detain PTI workers as per section 3 of the Maintenance of Public Order Ordinance. Police conducted a raid in Lahore and took into custody 15 workers of the Pakistan Tehreek-e-Insaf. 30 workers of the party were also arrested from Raiwind City area.

3 workers of Pakistan Muslim League-Quaid-e-Azam (PML-Q) were also arrested by police officials from Lahore’s Garhi Shahu area. According to a PML-Q spokesperson, police raided senior party leader Kamil Ali Agha’s residence but since he was not home at the time.

Actor Kashif Mehmood, who has been a public supporter of PTI, was also taken into custody by police but was later released. 18 workers of PTI were arrested from various areas of Sheikhupura.

A case for disturbing the peace was registered against the PTI workers, who were locked up at Kot Lakhpat Jail in Lahore. 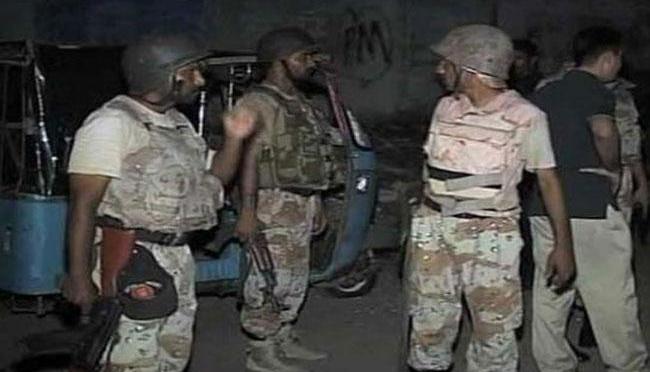 KARACHI: One alleged terrorist was gunned down by law enforcement agencies, who also detained as many as 33 suspects from various parts of Karachi in the wee hours of Monday.

Officials of the Counter-Terrorism Department (CTD) conducted an operation in Karachi’s Korangi area in which one alleged militant was killed. Sources claimed that while one alleged terrorist was killed in an encounter, the other managed to escape.

Police and Rangers conducted search operations in Shah Faisal Colony no. 6, Paposh Nagar, Mujahid Colony and adjacent areas. The raids were conducted after the LEAs were tipped off regarding the presence of miscreants’ in the localities.

Law enforcement agencies conducted another search operation in the city’s Gulshan-e-Iqbal area and took into custody Muhammad Ali alias CNG. The suspect was said to be affiliated with a political party.

Mayor of Islamabad Shaikh Ansar Aziz said the Metropolitan Corporation Islamabad (MCI) has got approval from the law ministry to establish Metro Police that would be used to remove encroachment from the city.

“The Ministry of Law has formally approved the proposal for setting up Metro Police after which a summary has been sent to the Prime Ministry Secretariat for final approval. Hopefully, the notification in this respect would be issued soon,” he said.

Shaikh Ansar Aziz said encroachment would be removed from residential and commercial areas to restore the beauty of the markets and bazaars, adding “The Metro Police would act against encroachment without any discrimination and no compromised would be made in this respect.”

He said both urban and rural areas are important for MCI that is why the developments schemes worth millions of rupees are being prepared for each and every area of the capital city.

TAXILA: MNA from Taxila and PTI leader Ghulam Sarwar Khan alleged that the Punjab government was harassing and victimising party workers by raiding their houses and detaining their family members in undisclosed locations in bid to stop them from participating in the November 2 Islamabad lockdown.

He was addressing a press conference at the local party secretariat on Sunday. Local party leaders Raza Shah and Ammar Sadeeq Khan were also present.

Mr Khan claimed that the provincial government was using all tactics to harass the PTI workers.

He claimed that the father of a local PTI activist and the son of a councilor were also picked by the police.

He said without search warrants, the police were raiding the houses of PTI activists and harassing their family members.

He claimed that the police raided the house of MPA from Wah, Taimoor Masood, Vice President Wah Cantonment Board Amjad Kashmiri, councilor Malik Ihtasham and former Naib Nazim Sheeraz Ahmed. He said a large number of PTI workers from Taxila and Wah would participate in the November 2 Islamabad protest.

Meanwhile, local PTI leaders, office-bearers and councilors went underground to avert arrest. According to family members of PAT district general secretary Saifullah, the police raided their house and harassed them.

The contingents have also been deployed at Margalla hills to stop the entry of PTI activists from Hazara and other parts of KP in the federal capital.

The reinforcements from other districts arrived here to assist the local police in maintaining law and order. Police and FC contingents deployed on the roads leading to Islamabad have been equipped with batons and riot gear.

The police raided PTI offices in several localities and detained at least 10 workers. Those rounded up were shifted to undisclosed locations and are likely to be booked under the Maintenance of Public Order (MPO).

ISLAMABAD: The Islamabad High Court (IHC) Monday restrained Pakistan Tehreek-e-Insaf from locking down the federal capital and directed them to hold sit-in at the designated place only.

Former United States President George W. Bush mistakenly described the invasion of Iraq as “brutal” and “unjustified” before correcting himself to say he meant to refer to Russia’s invasion of Ukraine. Bush made the comments in a speech during an event in Dallas on Wednesday, while he was criticising Russia’s political system. “The result is … END_OF_DOCUMENT_TOKEN_TO_BE_REPLACED

Reuters: More than 500,000 people have fled their homes in India’s northeastern state of Assam to escape heavy floods triggered by pre-monsoon rains that drowned seven, authorities said on Wednesday, as they warned the situation could worsen. One of the world’s largest rivers, the Brahmaputra, which flows into India and neighbouring Bangladesh from Tibet, burst … END_OF_DOCUMENT_TOKEN_TO_BE_REPLACED

The government began talks with the International Monetary Fund (IMF) on Wednesday over the release of crucial funds, a process slowed by concerns about the pace of economic reforms in the country. Pakistan has repeatedly sought international support for its economy, which has been hit by crippling national debt, galloping inflation and a plummeting rupee. … END_OF_DOCUMENT_TOKEN_TO_BE_REPLACED