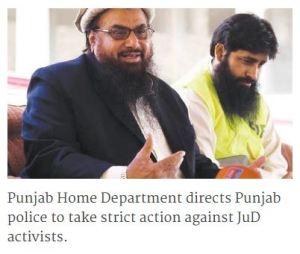 RAWALPINDI: The Punjab Home Department on Wednesday directed Punjab police to take strict action against activists of Jamaat-ud-Dawa Pakistan (JuD), an organisation which is on the UN watch list and is accused by India of being involved in the 2008 Mumbai attacks.

It is headed by Hafiz Mohammad Saeed, who has been engaged in fundraising throughout the country via the organisation’s charity wing Falah-e-Insayat Foundation (FIF).

In its directions issued to the additional inspector general of police operations Punjab and to divisional police chiefs across the province, the home department has asked for details of fundraising by JuD and other proscribed organisations as the activity is against the law.

According to the directive, JuD is making efforts to collect funds through fitrana, zakat and sadkaats. It said that members of the organisations were more active during Ramazan and distributed pamphlets, put up posters at various locations in Matiari Sindh, inviting people to give them their charity money.

Activists of the organisation asked Matirai locals to make donations to FIF in order to avoid the government ban on proscribed organisations being involved in fundraising.

The Madressah Umar Bin Khatab (RA) in new Saeedabad and Falah Markaz in New Hala, Matori have been designated as donation points for the fundraising.

A senior police official told Dawn that the action was based on reports from intelligence agencies who watched proscribed organisations. He said the step should have been taken earlier and that the provincial government had been reluctant to take direct action against religious parties without concrete reason.

“Though the international community put JuD under observation after the rumours spread by India, JuD’s charity organisation FIF was involved in a lot of welfare work in Azad Jammu and Kashmir and the northern areas after the 2005 earthquake and the government gave it [leeway] for their work in the past,” he said.

However, he said, the government had realised that the charity organisation was not the real face of the outfit and had decided to look into how it spent the donations it collected from people in the name of charity.

Rawalpindi Regional Police Officer Mohammad Wisal Fakhar Sultan Raja and other senior officers were reluctant to talk on the issue.

“The instructions did come through and the police implemented the government’s directions,” was all RPO Raja said on the matter.

Filmmaker Nadav Lapid, head of the jury at the International Film Festival of India (IFFI), slammed the controversial film The Kashmir Files – an official entry at the event – calling it a “propaganda, vulgar movie, inappropriate for an artistic competitive section of such a prestigious film festival”. The controversial Kashmir Files, laced heavily with the anti-Muslim sentiment, … END_OF_DOCUMENT_TOKEN_TO_BE_REPLACED

The Inter-Services Public Relations (ISPR) on Thursday denounced a top Indian military official’s statement about taking control of parts of Azad Kashmir as an “apt manifestation” of the Indian army’s “delusional mindset”. “The unwarranted statement of a high-ranking Indian army officer concerning Azad Jammu and Kashmir is an apt manifestation of Indian armed forces’ delusional … END_OF_DOCUMENT_TOKEN_TO_BE_REPLACED

After weeks of intense speculation and rumours, Prime Minister Shehbaz Sharif on Thursday chose Lt Gen Asim Munir as the new chief of army staff (COAS). Information Minister Marriyum Aurangzeb made the announcement on Twitter, saying the premier had made the choice while exercising his constitutional authority. She further said that Lt Gen Sahir Shamshad … END_OF_DOCUMENT_TOKEN_TO_BE_REPLACED