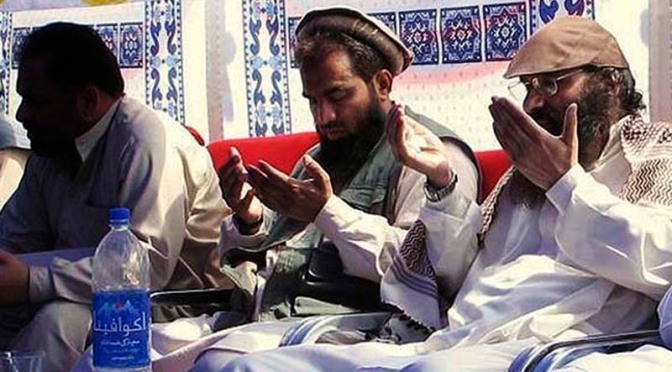 ISLAMABAD: The Islamabad High Court (IHC) on Monday sent notices to the federal and district magistrates, seeking their replies on the detention order of alleged mastermind of the 2008 Mumbai attacks Zakiur Rehman Lakhvi.

During today’s hearing, Lakhvi’s counsel Advocate Rizwan Abbasi contended that it was the third time his client had been issued with the detention orders.

The court sought replies from the district and federal magistrates and adjourned the hearing to March 5.

Lakhvi, who was granted bail by an anti-terrorism court in Islamabad in December last year, has been detained under the Maintenance of Public Order (MPO) at Rawalpindi’s Adiala Jail.

Last year on Dec 18, an anti-terrorism court (ATC) had granted post-arrest bail to Lakhvi. The bail decision had triggered a furious response from New Delhi and Pakistani prosecutors had swiftly announced they would appeal against it.

On the same day, the federal government ordered his detention under the MPO. When the IHC suspended the detention order on Dec 29 2014, Lakhvi was rearrested in an over six-and-a-half-year-old kidnapping case.

Lakhvi is among the seven persons charged with planning and helping carry out the 2008 Mumbai attacks. The six other men facing trial in Adiala Jail for their alleged involvement in Mumbai attacks are Hammad Amin Sadiq, Shahid Jamil Riaz, Younas Anjum, Jamil Ahmed, Mazhar Iqbal and Abdul Majid.

At the time of the attacks, Lakhvi was believed to be the operational head of the banned Laskhar-i-Taiba (LT) that has been accused by India of carrying out the attacks in India’s financial capital.

Lakhvi along with Zarar Shah was allegedly the key planner of the attack that killed 166 people.

A report issued by the doctors at Rawalpindi Central Jail Adiala declared Zahir Jaffer, primary accused in the Noor Mukadam murder case, medically “completely fit” on Thursday. Additional Sessions Judge Atta Rabbani received the report at today’s hearing, where Zahir was brought by policemen on a stretcher. The report stated that Zahir’s medical examination was … END_OF_DOCUMENT_TOKEN_TO_BE_REPLACED

BEIJING: Chinese For­eign Ministry Spokesperson Zhao Lijian brushed away media reports that suggest the Chinese contractor has demobilized from the Dasu dam project site. At his regular briefing at International Press Centre (IPC) on Thursday, Mr. Zhao said he was unaware of any preconditions put forward by the contractor for resuming work on the dam … END_OF_DOCUMENT_TOKEN_TO_BE_REPLACED

India and Pakistan will lock horns in a blockbuster T20 World Cup group clash for the second year running after the fixtures for the October-November 2022 tournament in Australia were announced on Friday. The arch-rivals will lock horns at the Melbourne Cricket Ground (MCG) on October 23, a day after Australia begins their title defense … END_OF_DOCUMENT_TOKEN_TO_BE_REPLACED