PESHAWAR: Police on Monday registered cases against more than 1,400 people in Peshawar for refusing to vaccinate their children against polio during the ongoing drive in the provincial capital. 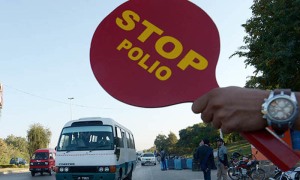 According to a source in the police, the city police have also arrested 471 parents under Section 3 of the Maintenance of Public Order (MPO) on the directives of Deputy Commissioner Riaz Khan Mehsud who have been sent to jail for refusing the vaccine.

The source added that police officials have initiated a crackdown against the rest of the accused people.

The local administration has ordered the implementation of Section 144 in the wake of the anti-polio drive in the city.

Pakistan is one of only three countries in the world where polio remains endemic but years of efforts to stamp it out have been badly hit by reluctance from parents, opposition from militants and attacks on immunisation teams.

The virus is most prevalent in the country’s restive northwest and a fresh immunisation drive began on Monday aimed at vaccinating more than 2.7 million children in Khyber-Pakhtunkhwa.

The government declared “war” on polio last year and Mehsud said officials would brook no refusal from parents.

“There is no mercy, we have decided to deal with the refusal cases with iron hands. Anyone who refuses (the vaccine) will be sent to jail,” Mehsud said.

Those arrested on Monday were from suburban areas of Peshawar where militant groups regularly attack police and polio workers and where opposition to vaccination is relatively strong.

Muhammad Mumtaz, another senior official, confirmed the arrests and said that the detainees would “be freed only after a written assurance and providing two guarantors” to ensure their children get the drops.

Taliban militants claim that the polio vaccination drive is a front for espionage or a conspiracy to sterilise Muslims.

They stepped up their attacks after a Pakistani doctor was recruited by the CIA to set up a hepatitis immunisation drive as part of efforts to track down Al Qaeda chief Osama Bin Laden.

Last year, the number of polio cases recorded in Pakistan soared to 306, the highest in 14 years.